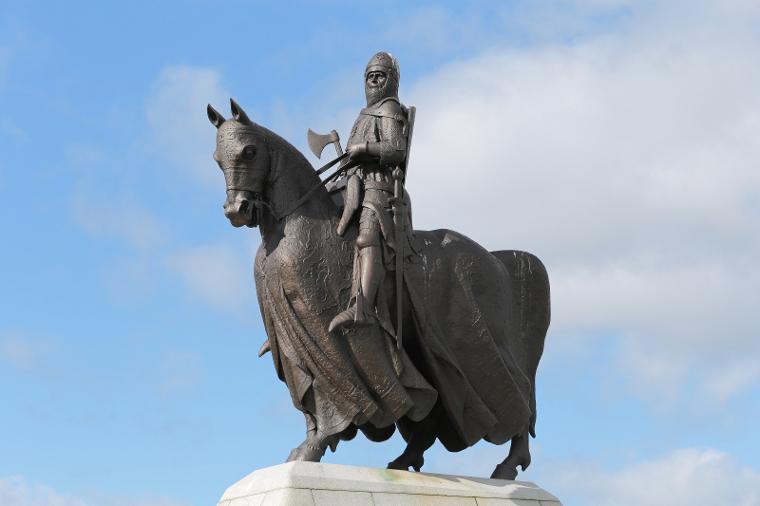 Find out about Robert the Bruce the Outlaw King, on a private tour with Tartan Tours Scotland.  We have two tour options, firstly  a full day tour covering three Outlaw King locations- Bannockburn, Scone Palace and Dunfermline Abbey. Secondly an exclusive top end once in a lifetime opportunity to visit The Bruce's ancestral home with a guided tour by Lord Charles Bruce .

Robert the Bruce was born on the 11th of July 1274 in Turnberry Castle and died in 1329 in Cardross. Bruce's body is buried in Dunfermline Abbey and his heart is buried in the ruins of Melrose Abbey.

Robert the Bruce was crowned King of Scotland at the stunning Scone Palace where the famous Stone of Destiny was used to crown Scottish Kings until 1292 .

Our Outlaw King was King of Scotland from 1306 until his death in 1329. One of Scotland's most famous warriors of his generation he led Scotland in the first war of Independence against England after William Wallace.

In September 2018 a new Netflix film was premiered about Robert the Bruce called Outlaw King. Written and directed by David MacKenzie it was released on the 9th of November starring Chris Pine as the Outlaw King. It’s an epic story about Robert the Bruce, and his war to liberate Scotland from English occupation. Filming took place in various locations including Linlithgow Palace, Doune Castle, Dunfermline Abbey, Blackness Castle, Glasgow Cathedral and Loch Lomond.

Tartan Tours Scotland is delighted to be able to offer the opportunity to see the real Outlaw King in our private tour. Places that he saw with his own eyes. The very ground that he walked on and where he sat to be crowned King of Scotland, through to his final resting place. Our Outlaw King tour takes you to Bannockburn, Scone Palace and Dunfermline Abbey.

Our tour allows you time to enjoy all these sites with your private tour guide who will be on hand to make this a day to remember.